Many of our recent holidays have been full of exploring, with us moving around on a regular basis and filling our time away with as much as possible. Whether it be climbing mountains in Nepal or walking around Barcelona with map in hand, trying to squeeze in as many sites as possible, our times abroad always seem to have somewhat of a hectic schedule. We occasionally find ourselves asking questions such as “why don’t we ever sit still?’ or “we’re on holiday, so why are we so tired?’. Don’t get me wrong, these kind of holidays are exactly how we love to spend our moments away, however, sometimes it’s nice to slow the pace down a little, unwind and rest. After all – it’s a holiday!
With this in mind, our recent trip to France was all about doing nothing. A week in the sun, eating, drinking and laying around by the pool was exactly what we were looking for from this trip and that’s exactly what we got.
We set off in the morning, and headed to Folkestone where we boarded the Euro Tunnel. For those of you that haven’t travelled this way before, it’s a brilliant gateway to France. At approximately £90 a car, if there is more than two of you, it should work out to be more cost effective than flying – and arguably slightly more interesting.
The journey across the channel is around 35 minutes. You drive your car directly on to the train, turn off your engine, wait around for a short period and then you’re in France! Customs is quick and efficient and very soon after you arrive, you find yourself on the beautifully quiet roads of France.
For the latest prices on the Eurostar, check: www.eurotunnel.com/uk/home

As we were driving in to the heart of the French countryside – and because we had a young toddler with us – we felt it necessary to break the journey up in to two stages. Therefore, we stopped off after the first three hours’ at a place called Ajou. When you arrive in these small towns/villages of France, they are exactly as you imagine with more than enough architectural wonders to please the eye. Ajou was my first taste of rural France and we knew instantly that due to the calm, laid-back atmosphere of the French countryside and this quiet little village, this was going to be the best place to provide us with the doing nothing holiday that we had been searching for.

Sarah’s parents had booked a beautiful French villa called L’Ajoussienne. Upon arrival, we were greeted by the hosts Brigitte and her husband Joel who had pulled out all of the stops in preparation for out visit. They made sure the England World Cup was set up on the TV for us, provided some fizzy raspberry juice and French cider. We sat and watched England go through to the quarter-finals then headed in to the garden for dinner, cheese and wine. It was the perfect start to a little family trip.

In the morning we took a five minute stroll to the local village that comprised of a handful of little shops. Luckily, one of these was a patisserie which was perfect as we were on the hunt for French croissants for breakfast. There is not much around here at all so I’d recommend only using this area as a pit stop rather than somewhere to stay longer.

We then set off on our next journey – a three hour drive to Limalonges.

A few hours later we arrived at Le Logis de Limalonges. Wow – what a beautiful place this was! An incredible French villa with the bluest of pools out front. Paul & Kry, some family friends of my parents were the most accommodating hosts. They were so smiley and excited to have us in their beautiful home. They have lived there about six months and currently rent out two gîtes for people to stay in. We stayed in the three bedroom gîte on the left which was very spacious with a gorgeous farmhouse kitchen. We were really lucky too as this week we were the only guests, meaning that we had the pool to ourselves! That being said, the garden and pool are both big enough so if there were other people staying there at the same time it wouldn’t have been a problem.
(Book this villa here)

The local area is considerably remote and therefore extremely peaceful. Most of out week here was spent lounging around the pool, having BBQ’s, eating lots of cheese and playing garden games. 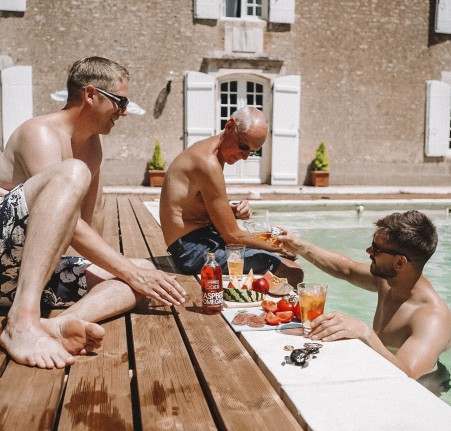 On the second day we ventured out and took a five minute stroll down the road to a traditional French restaurant called Le Trois Fleurs which was recommend to us by Paul and Kry. To say this place looked basic would be an understatement. Consisting merely of some plastic chairs and wooden tables, that’s about as far as the interior design stretched (I can imagine that if this place hadn’t been recommend to us beforehand, then maybe we would have easily walked past it without even knowing it was a restaurant).
On top of this, after sitting down we weren’t even given a menu, only told what we would be eating! This chef had a lot riding on his ability to cook all we could do is trust him as I’m not sure there was another restaurant for miles.
Luckily, it turned out that this guy seriously knew how to cook! The food was delicious and clearly made with love. We enjoyed a four course meal each with constant topping up of our wine carafes, for a grand total of …. €11 each! Absolutely hilarious.
Would highly recommend this place if you’re happy to have a surprise lunch. It’s important to note that due to the size of the village, the restaurant only opens at lunch time.

About twenty minutes away from Le Logis de Limalonges is a beautiful little commune called Verteuil sur Charente. This area is seriously nice and came recommended again by our hosts Paul and Kry.

We had lunch alongside the river at a restaurant called Le Moulin De Vertu next. Situated next to a beautiful Chateaux, you couldn’t ask for anything more picturesque. As expected, the food blew us away again. A three course meal for €16 each! After lunch we took a stroll around the village, exploring some more of the beautiful architecture . We didn’t have time to do this but you can rent canoes and float down the river which looked brilliant!

One of our favourite parts of the trip was visiting some of the many Sunflower fields that were near where we were staying. For years I’ve been saying to Louis how much I have wanted to find a Sunflower field, so I was in my element! They were absolutely beautiful this time of year with all the sunflowers fully grown and open. I couldn’t believe how many there were and with Louis having the drone it was the perfect place to fly over and take some shots from the sky! (See Louis’ little video below – incredible scenes!)

For your own reference, the laws in France for UAV’s or drones are currently quite relaxed (see requirements below). This meant that Louis was able to fly quite frequently, allowing for some great aerial shots.

For any tips on how Louis made this video, including the use of Adobe Premiere Pro or a DJI Mavic drone, contact him on louisrus12@yahoo.co.uk and he’ll be happy to help.

After a relaxing week of doing nothing, eating, drinking and chilling around the pool, it was time to drive back to the UK. We headed back home via the Euro Tunnel with a car full of French cheese, meats and booze! The perfect end to the perfect family holiday. 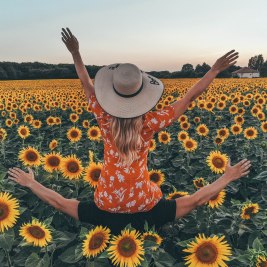 Published by SaLt AnD CoCoNuTs

A teacher and a nurse from Wimbledon, travelling this world as much as we can. Providing travel tips for the everyday person. View all posts by SaLt AnD CoCoNuTs

16 thoughts on “Sunflowers in France”