The leaves have fallen, the temperature has dropped and summer has officially ended. There have been many times over the last few years where accepting the impending fate of winter has been difficult for me. The dark mornings followed by the dark nights can feel quite uninspiring at times. But this year has felt a little different. Perhaps it’s something to do with the incredible summer we’ve had? A summer that kept on giving. So many times, we found ourselves saying “That’s it, summer is definitely over now” and then before I knew it, I was walking down the street in a t-shirt again, admiring the the bright blue sky that hung over the sea. Maybe it’s something to do with moving to Brighton and being excited by our new house that’s significantly bigger than our tiny studio flat in Wimbledon? For whatever reason, this year I’ve found myself somewhat excited by the prospect of winter. But before we turned on our heating and put on our winter slippers, we thought we’d try and squeeze in one last holiday to help keep our spirits high. 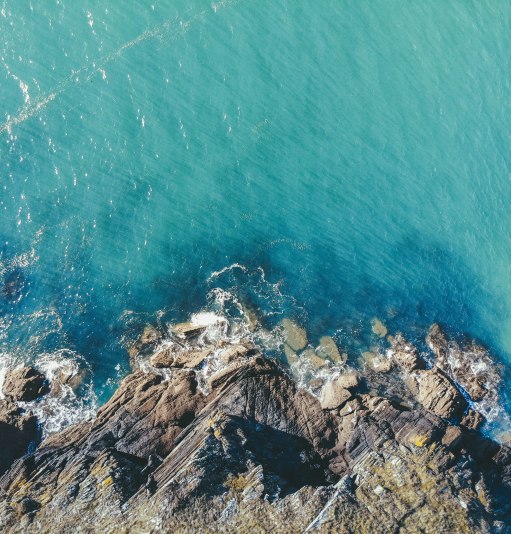 After both starting new jobs, the last two months have been pretty hectic therefore we knew instantly that going abroad would be more hassle then we wanted. By going to a new city somewhere in Europe, I’m sure we would have found ourselves running around  trying to squeeze in all the sites of and ultimately burning ourselves out even more. So we made a decision early on that wherever we went, it needed to be somewhere that we could drive to. We considered Edinburgh, but then decided it’s a place that we really want to explore in depth and probably not the kind of place to go and chill. We also considered the north of Scotland, in the Highlands but agreed that it was maybe a little too far for a three or four day trip. Then we came up with Cornwall. Having both not been to for years and having fond childhood memories of the area, this instantly became the winning choice. So we began exploring some ideas of places to go in Cornwall and after speaking with a number of people, Fowey was an area that seemed considerably popular and looked beautiful online. Luckily our friend had recently visited Fowey and spoke very highly of her experience there and also gave us some ideas about cool places to stay. As we were aiming to spend the four days mostly chilling, we wanted to make sure that we stayed somewhere quite nice but not too pricey. Shepherd’s huts are becoming more and more popular these days and after viewing some on AirBnb we could see why. Always looking for something a little bit different, we suddenly found ourselves obsessed with the idea of staying in a Shepherd’s hut.
The hut that instantly grabbed our attention was one that sat in the middle of a farm, just outside of Fowey. Aside from the pictures showing a seriously cool little setup, the fact that it was isolated worked perfectly for us as we knew it would force us to take it slow and unwind. The hut looked great! However, the thing that sealed the deal was the hot tub out the front. Yes, you heard it – a hot tub! What better way to see in the winter than to sit in a middle of farm in a hot tub outside the only Shepherd’s Hut for miles!?
We instantly booked. 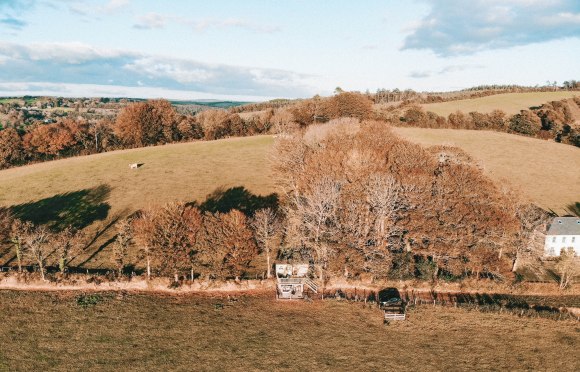 Upon arrival, the hut was better even than we had expected. Having only been built within the last two years, it was modern, clean and stylish. We were greeted by the farmer and his wife who had designed and built it themselves. They presented us with a bottle of prosecco and two Cornish scones with cream (jam first then the cream). It was all very cosy and the perfect start to our Cornish getaway.

Naturally, we couldn’t help but walk in and begin taking pictures.
After picture time – we jumped in the tub! 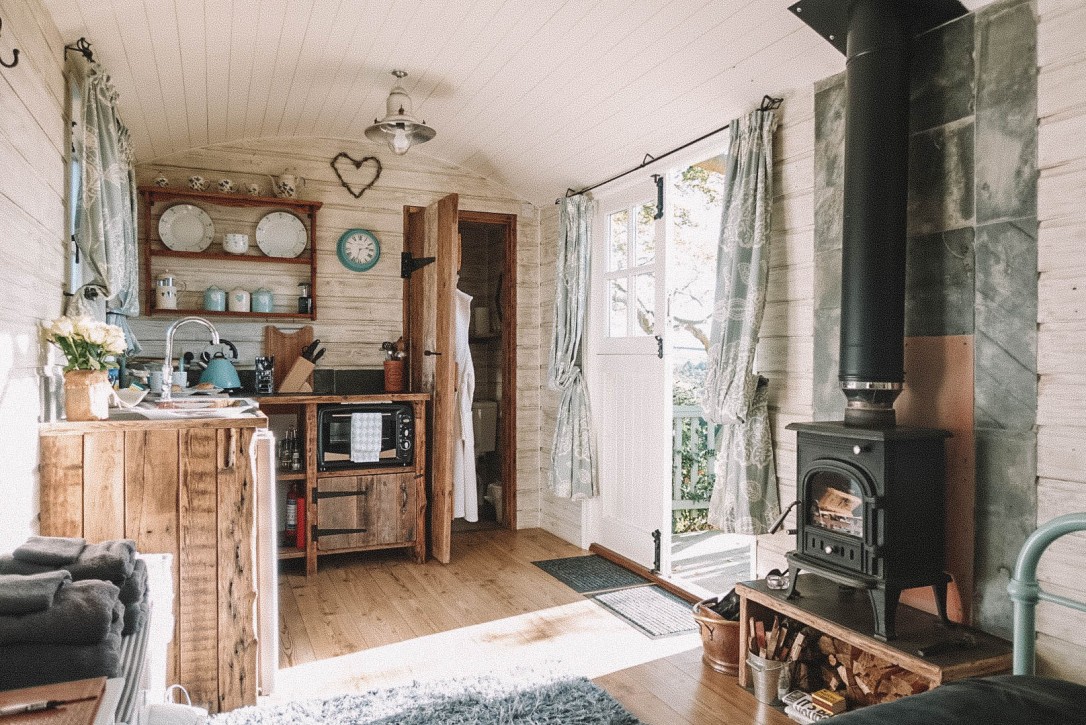 This is definitely one of the coolest places that we’ve stayed in and at only £100 a night it was an absolute gem! 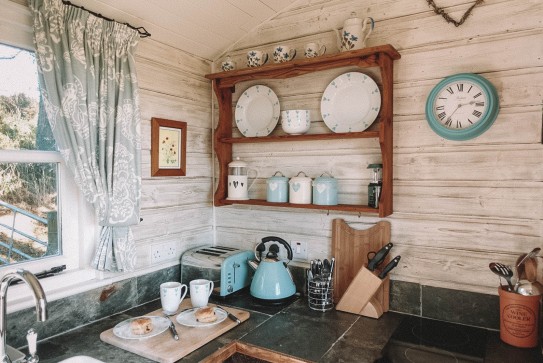 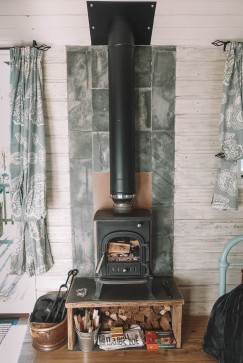 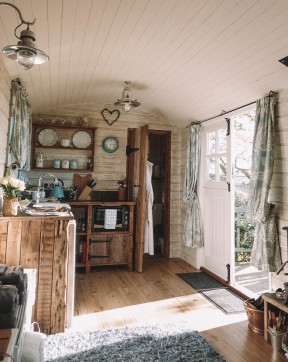 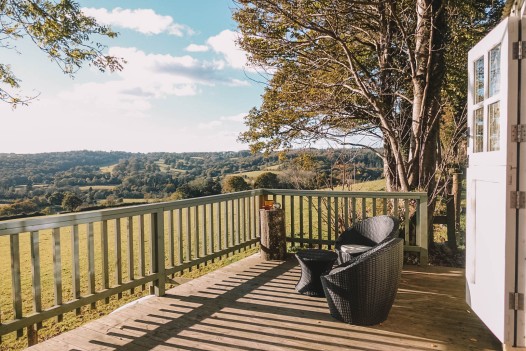 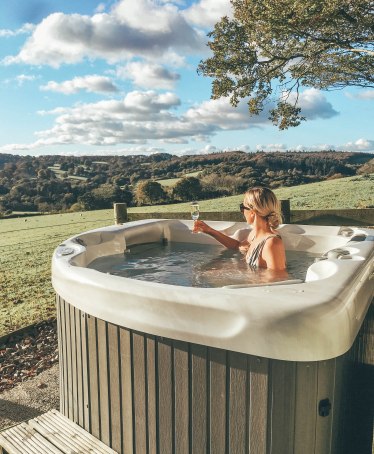 The next day we headed in to Fowey to explore the area and also to find a nice cream tea. If you haven’t been here before, it doesn’t take anything more than a minute to realise that it’s stunning. We walked around the small town, through the tiny cobbled streets and soaked up the atmosphere. Luckily, the weather was on our side for the whole trip which meant that Fowey was presented at it’s best. There were moments where we thought that we could have been in Italy or something. 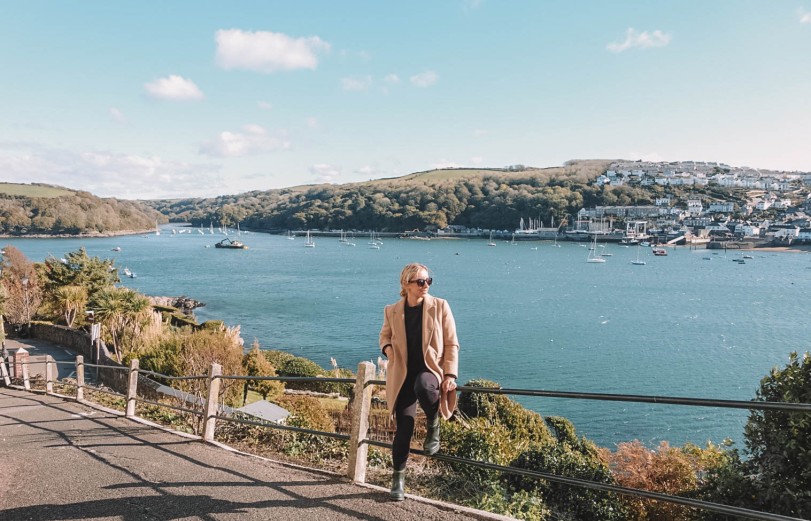 Of course, it was only right for me to get my drone out and the views from the sky were pretty incredible. 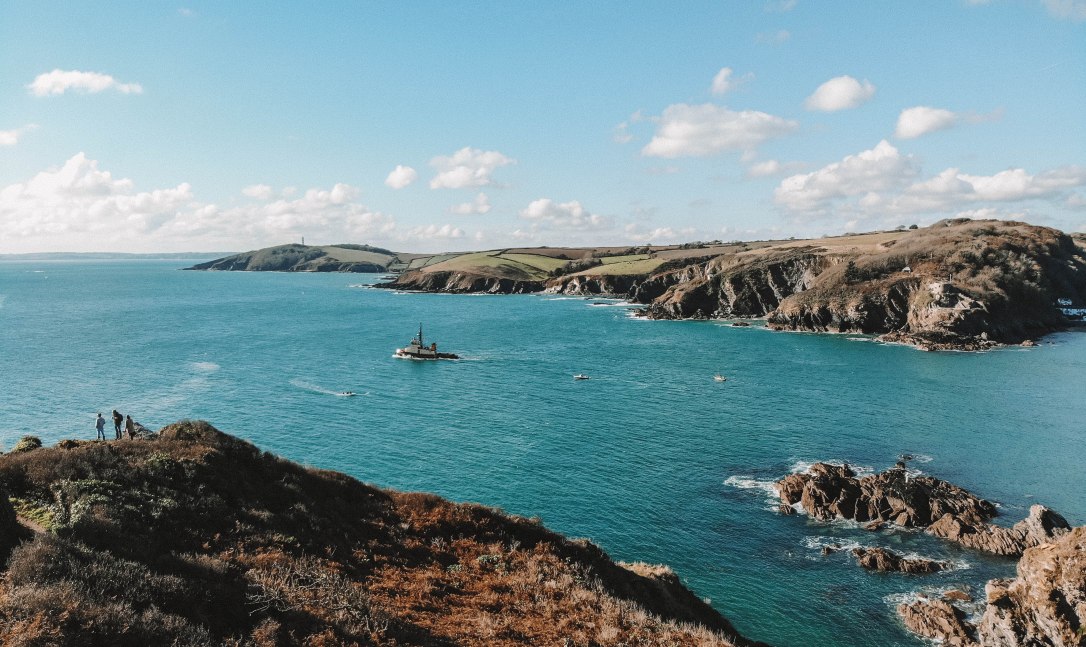 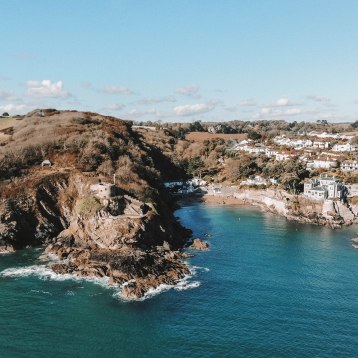 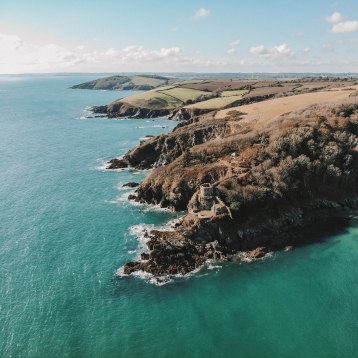 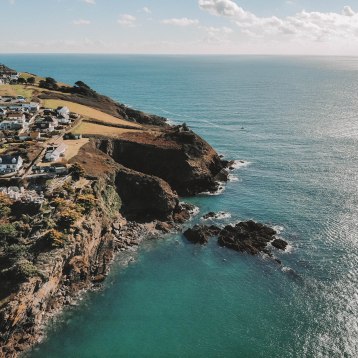 As you can see, the views were unbelievable.
I think sometimes it’s easy to forget just how nice locations in the UK are.
Fowey had me at ‘hello’ with it’s Mediterranean feel. 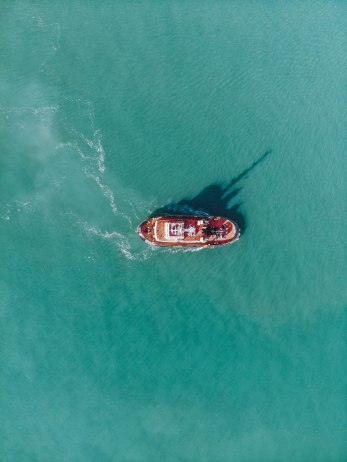 The next day we set out on a coastline walk from Fowey to Polperro. We were told that the walk wouldn’t be easy and shouldn’t be underestimated. But nonetheless, again Sarah and I turned up ready for a challenge, dressed in the wrong clothes for the occasion and without a bottle of water – classic Salt & Coconuts behaviour. Luckily, we had two of our friends with us who bought along snacks and drinks for the supposed two-hour walk.

If you’re looking for a beautifully scenic walk, then this one should be considered. The landscapes were breathtaking throughout. The walk itself also took most of our breath away as it was full of hills and our planned two hour walk turned in to a six hour hike. It was worth it though. 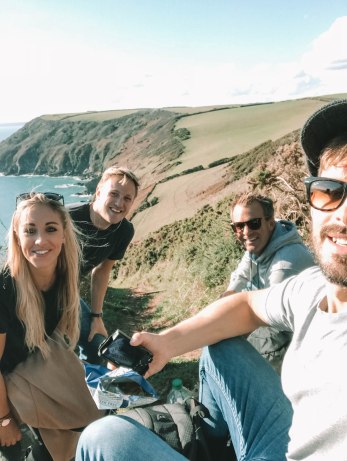 We made it to Polperro in one piece. The town is a very small, quiet and still. With a number of properties of all shapes and sizes dotted amongst the hills, it a little town of wonder. Upon arrival, we headed straight for our final destination of the day – the Blue Peter bar. Having been told about this bar by a number of people before we arrived in Cornwall, we couldn’t wait to celebrate the end of our walk to Polperro with a cold beer. This was one of the most rewarding beers I’ve had in a long time. You can’t beat that feeling of a deserved pint either that the end of your working week or – in this case – a seriously long walk. 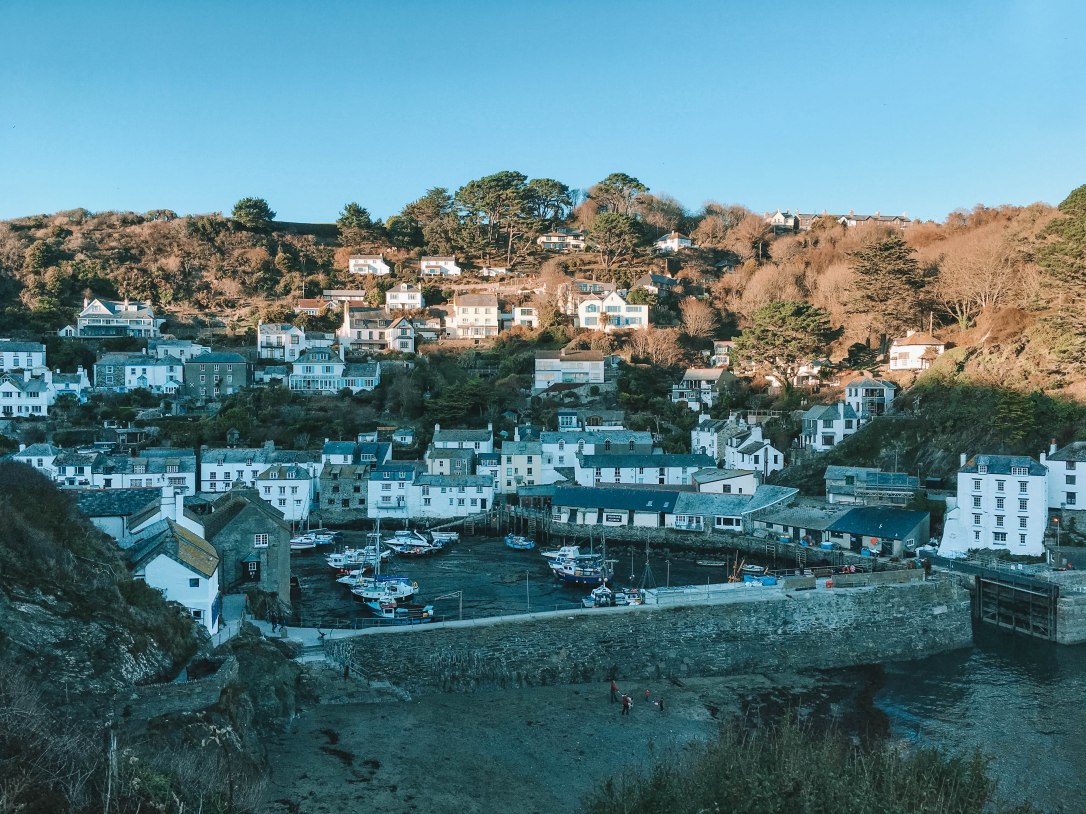 The Blue Peter bar is as you can imagine from such a small town. It’s very small, cosy and populated by the ever so welcoming local people. It’s one of those bars that when you walk in you can feel the slow pace and relaxed atmosphere. The food was also incredible. I had a homemade Steak and Ale Pie with that kind of gravy that only you grandma knows how to make with her secret powers.

The next day was our day of rest. At the beginning of this blog, I said that this holiday was one where we’d chill and of course not only had we been quite busy since our arrival, we had completed a six mile coastal walk. Today WAS going to be set aside for chilling. We put on our cosy socks, whacked the logs in the log burner, put on some music and watched the cows go by. 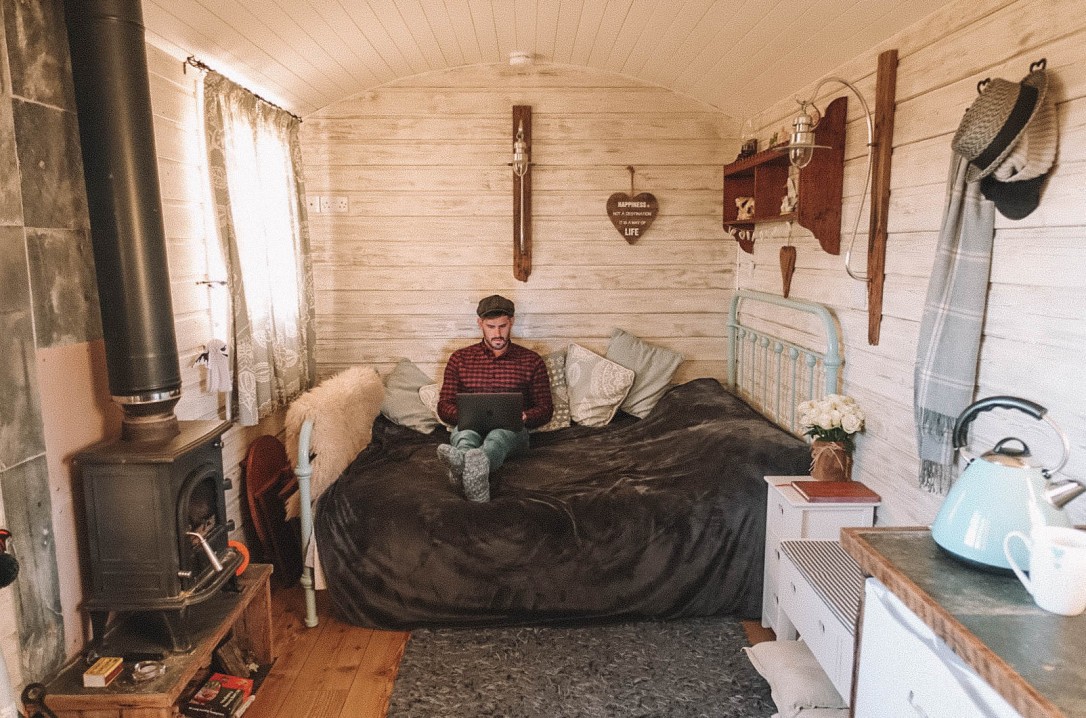 We spent the afternoon chilling in style.
Then
finished the night
watching the stars
from the tub.

This was a great trip and one that we’ll remember for a long time. We’ll definitely be heading back soon. 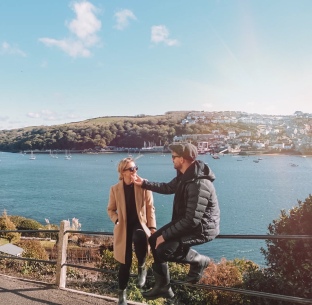 Published by SaLt AnD CoCoNuTs

A teacher and a nurse from Wimbledon, travelling this world as much as we can. Providing travel tips for the everyday person. View all posts by SaLt AnD CoCoNuTs